4 Must Read Books to Know the True History of India 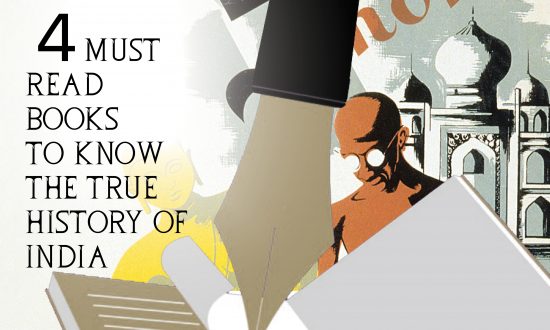 Governments trying to re-write history in the school text-books is not an alien action, especially in India. In some part of the country, Jawaharlal Nehru and Mahatma Gandhi are not even a topic of study in Indian history. While, this exercise will continue as and when the government changes, we know that the facts cannot be changed, as it is written in its truest form in the books that have been written years ago. Here are some books on Indian history for those who are interested in knowing more about India’s real past.

Born to a Bengali family of Santiniketan in West Bengal, Amartya Sen is the second Indian after Rabindranath Tagore to receive a Nobel prize.  The Argumentative Indian is a collection of his essays categorized into four different parts; Voice and Heterodoxy, Culture and Communication, Politics and Protest, Reason and Identity. The first part of the book introduces and explains the principal themes related to India’s long argumentative tradition. The selection of focus here is mainly for three distinct reasons: the long history of the argumentative tradition in India, its contemporary relevance, and its relative neglect in ongoing cultural discussions. Through his essays, Sen argues that the understanding and use of India’s rich argumentative tradition are critically important for the success of our democracy, the defence of secular politics, the removal of inequalities related to class, caste, gender and community, and the pursuit of sub-continental peace.

While we study in length and breadth about India’s struggle for independence, what happened after 1947 is not a much-discussed topic there. Well known historian Ramachandra Guha’s India after Gandhi: The History of the World’s Largest Democracy tells the history of free India. Guha narrates the lives and public careers of long-serving Prime Ministers, Jawaharlal Nehru and Indira Gandhi, along with the feeling and sensitivity about peasants, tribal, women, workers and musicians. A very-well researched writing, India after Gandhi is a must-read.

Born in Scotland in 1965, William Dalrymple has written many books on Indian History. Dalrymple’s sixth, and his second to reflect his long love affair with the city of Delhi, The Last Mughal is a masterpiece of non-fiction narrative. Dalrymple worked many documents in association with the Urdu scholar Mahmood Farooqui to come up with detailed stories that are largely ignored in the Indian accounts of the even 1857, a major, but ultimately unsuccessful, uprising in India against the rule of the British East India Company.

Freedom at Midnight compels the readers who consider history as boring to change their opinion. With a very interesting narrative style, Larry Collins and Dominique Lapierre have given the world a detailed explanation of the tumultuous year of India’s independence from Great Britain in 1947.

Leapfrog – Six Practices to Thrive at Work
Understanding the Right Signals to Live the Life of a Leader
The Alchemist and Paulo Coelho’s Magical Lessons on ‘How to Follow Your Dreams’
On this Teachers Day, here are 3 Must-Read Books of APJ Abdul Kalam for Every Student
What Makes Man’s Search for Meaning by Viktor E. Frankl a Life-Changing Read?
Recruitment in the Era of Industry 4.0