Home /LEADERS' INSIGHTS/How do We Use Design as a Tool to Affect the Bigger Picture and Reach a Larger Audience?

How do We Use Design as a Tool to Affect the Bigger Picture and Reach a Larger Audience? 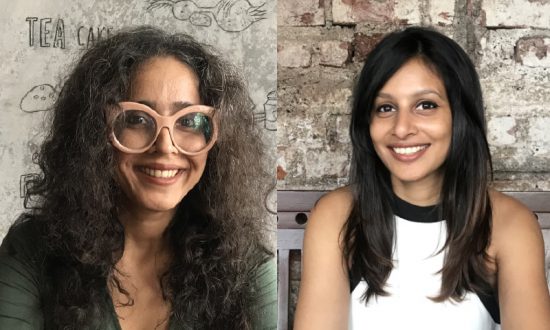 Hetal Ajmera has always had a penchant for creativity. Her career spans years and her rolodex consists of household names such as Fevicol, Orange (Vodafone), Cadbury, DeBeers, Shoppers Stop and Times of India. Incidentally, she realised this pull towards the arts while she was working for Leo Burnett, Ogilvy, JWT, Contract, and others. Over the years she has brought her unique conglomeration of art direction and design to a plethora of projects. A gold medalist in Commercial Art from Sophia Polytechnic, she finally transformed her passions into reality and started Sharpener.

Bianca D’sa Vincent is an alumnus of St. Xaviers college with a major in Sociology. Her final goal was to work in Human Resources, but that was not to be because her mind was always ruminating over art. With no formal training, her climb was steep. However, she did not lack grit nor determination, and thus, for seven years, she was thriving in the advertising world. Her repository is filled with clients; you’ll find names from Saffola to Shoppers Stop to Asian Paints to Cabury. Once intangible and abstract, her passion for art has since been manifested. An epiphany to scale new heights, led her to quit advertising  and thus Sharpener was born.

Take a piece of paper, place your hand on it, and trace its outline with the other. A seemingly innocuous activity, this has been a childhood rite of passage, has it not? When an explorer stumbled upon an ancient cave in France, he was filled with wonder because he realised that the myriad parietal drawings were interspersed with many such handprints, with pigments of ochre, rust, and ivory. The need to express and create and the love for art and design have always existed in tandem, since as early as what we refer to as ‘then’. Make no mistake — the ‘now’ is considerably different. We have evolved beyond our wildest imagination, yet we are all that preceded us and all that will succeed us.

Today, design has metamorphosed. It has permeated occupations, fields of study, areas of research, hobbies. Sometimes, it is so mind-bogglingly excellent that it becomes invisible, leading us to not even comprehend how much of it we are subject to. An omnipresent force and an undeniable part of our lives. Perhaps majorly two-dimensional once, design is multifaceted beyond compare. With the kind of power it wields, we must ask how it can be used as a tool and how it can reach a wider audience?

The answer is exactly ‘right’; it is horizontal, vertical, and intersecting. The first forte lies in the vast expanse of mediums that constitute the term itself. Rather than being static, it is a dynamic mix, and it spans architecture, mechanics, media, technology, and more. Likewise, it draws from several knowledge bases, thereby improving the process that goes behind the outcome.

An apt example of this is the tourist t-shirt which tackled language barriers through icons. It was ideated, tweaked, shaped, modified, produced, and styled by taking brilliant minds and putting them to the task. A crucial part of design-centric thought is identifying a lacuna or a need and solving it with creativity. These very platforms that people use to interact with it also function as a means to contribute to it. Through feedback, critique is offered, and through compliments, encouragement. Making accessible the principles of what is being produced allows for emphasis on the process and not just the outcome. Why must it be about either the journey or the destination when it can be about both? This perspective increases efficiency as well. Take the paradigm of biomimicry, a design concept that derives from using elements from nature. When applied, be it to infrastructure or gadgetry, it is seen to be resourceful and sustainable, without skimping on the utility and sometimes even enhancing it.

This brings us to the second point, which is verticality. For sure, design does focus on the aesthetic and the utility, but it also introduces a tenet of meaning. It has the ability to be profound, along with the effect it has on society. Recently, there have been upheavals due to the issues that we collectively face. There have been glorious movements that have used symbols emblematic of the cause that is being advocated. Design thus acts as an umbrella, a visual identifier to represent. It builds communities, too, such as a fanbase for a band or a sports club. If the concept is a unifier, then design is what turns it into a thread that binds. Simple and complex, it characterises duality. Take the prototype of a ‘normal person’, which seems straightforward enough. Although now, it has become obsolete, with accessibility and diversity being emphasised due to a previous lack of inclusivity. Hence, a problem seen in multiple places, even in design, is being addressed as the old is made to change, through design. On the horizon of change is also technology. By transforming more and more abstractions and ideas into something concrete, it is sure to play a primary role at this turning point. New innovations such as artificial intelligence and augmented/virtual reality have leaned heavily on it, whether to make them appealing, easier to use, or adding to their capabilities. For applications, their user interface and user experience are huge factors for success. It is imperative to understand that design is not limited to visuals anymore, instead encompassing experiences and unique solutions for a more extensive audience in a more enriching way.

And this is where the intersection of the two aforementioned approaches comes in. At the junction of the longitudinal and the latitudinal is where the crux lies. The reason why design can be used as a tool and reach millions around the globe is that it is adaptable. However, it can become universal but still retain individuality. Design helps connectivity and communication, which in turn help it reach all corners of the world.

Nevertheless, it is still whimsical, sparking wonder and curiosity. Being intersectional and multidisciplinary can mould itself to any challenge to provide a custom resolution, no matter how big or small. There is keen thought behind each layer and each action that is taken with care. Not only will design be a fundamental tool for painting the bigger picture, but one for painting a better picture for everyone involved.

We have come a long way from handprints on cave walls, yet design has been one of the few constants at the core of our evolution. Instead of eschewing it due to the whole rhetoric surrounding the arts being considered unimportant, we must realise that it has been integral in the formation of the global village. The ‘seven seas’ is now much less a metric for distance but actually a hyperbolic phrase. Of course, design has an influence on everything, but we must make sure that the impact is positive, and furthermore, beneficial for many.

Do you have Dirty Data?
Making Sense of Generative AI: Current State, Its Promises & Pitfalls
Cybersecurity in the Age of Digital Transformation
2022 Security Wrap Up
How Audio Platforms Such As Podcast Are Upping The Digital Marketing Engagement Game
How Social Media Marketing Has Become a Business Necessity
CONTACT US