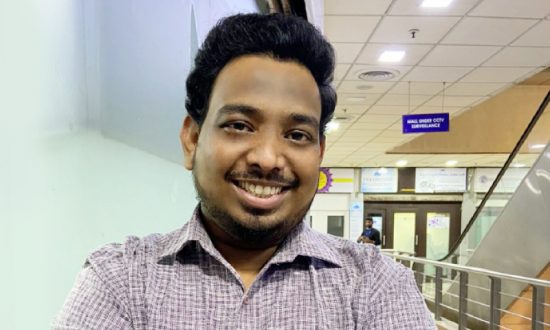 Navel Nazareth who is currently 25 years old, was always passionate about writing and wanted to build a career around the same. As he was pursuing Bachelors in Mass Media, starting a career as an intern for a renowned news broadcasting company gave him the required knowledge and skill-set to understand the journalism and media industry, later after his graduation, he worked for a well-known newspaper and drafted stories for various beats like Lifestyle and Technology. After working there for a while, he dedicated himself to working as a freelancer and worked with many reputed brands and celebrities to write content for their various social media platforms, formal correspondence, and website. Starting from an intern for television journalism, he is currently the co-founder of NAM Solutions and handles social media strategy, content for social media platforms, websites, and for PR for all the clients.

The COVID 19 pandemic came as a shock to all of us, but digitally speaking it was a phase of time when we realized how much we were lacking in spite of living in the 21st century. When the announcement of ‘Complete Lockdown’ was first announced, there was havoc in hundreds of organizations as they were not at all ready to move their entire businesses digitally. While the concept of Work from Home became the only solution to these situations, many were not even aware of the resources which could be used to make the best of that time. After individuals got a little hang of how they were supposed to operate, they realized that as there is no mobility of people happening the tactics of marketing and promoting their brand through traditional mediums were not even generating 10 percent of returns to the money which was invested, hence many companies decided to stop them. This was the same time when the stakeholders realized the true potential of marketing their products and services through social media platforms and hence there was a sudden rise seen in brands and organizations adapting digital platforms as their primary source of marketing strategy.

How did brands realize the true potential of digital marketing?

When it comes to traditional methods, there are many ways to place your brand and product in the market, but as we have witnessed it ourselves there isn’t a direct way to understand if our commercial has reached our target audience and how many customers have truly been influenced through their ad placement. This limitation could be completely taken care of when the companies approached digital marketing as their primary source. Through Digital marketing channels, the companies were able to keep proper control as to who are targeting these advertisements to and at the end of their campaign they would have analytics as to how many people have seen and responded to their advertisement to make further amendments for better results. The flexibility of targeting their advertisements to their desired audience not only helped them create brand awareness but also helped in amplifying their sales and brand notability.

How did digital marketers cope up with the sudden trends of making Digital Marketing brands a primary source of marketing?

When brands were made aware of the many benefits the digital marketing industry possess, this led to a sudden spike in agencies and there came a time when brands decided to dedicate their entire marketing budget on digital mediums as to previously the brand which were investing thousands, started investing in lacs of rupees to derive the desired outcome. The flexibility of promoting themselves on their desired platforms and to their selected target audience helped them in creating clearer content and have a noticeable impact on the response they receive through their visits, inquiry, and sales.

As people became distant from physical gatherings they chose the internet and social media platforms to be connected to each other. This directly contributed to bringing more and more accounts on social media and this made placing advertisements easy. Initially, a brand would like to stick to specific platforms like Facebook and Instagram, decided to invest in all popular and unpopular social media sites to showcase a 360 Degree presence over the internet. Many brands adapted the use of various social media campaigns where they either made people play polo on their brand made template or made them participate in various giveaway contests, while they either invested by distributing their templates or by distributing a few of their products for free, these steps surely helped them maintain brand visibility and this directly impacted in building the brand value it still possesses.

How did the Public Relations sector adapt to the pandemic norms and survived?

While Public Relations is considered to be an essential step for building a brand’s image, it is essential to be understood that there needs to be a perfect balance between PR and other streams of marketing to achieve desired results. In the pre-pandemic stage, there were certain ways and tactics which were used to bring notability and public attention towards a brand or personality. Hence, when there was a sudden restriction in even leaving our houses, initially it became nearly impossible to seek any media opportunity or public appearance for both celebrities and brand spokespersons.  It was a time when there was a need for new tactics and steps became essential to keep the fans and admirers informed about their favourite brands and various personalities. Mediums such as online media portals, news applications, paparazzi accounts, and social media influencers played a huge role in filling that void.

The pandemic switched personal interactions into zoom interviews, a pre-recorded radio interview into exchanging of voice notes, a telecast on television into an Instagram/Facebook live session, and a press conference into Virtual events. Initially, there was also a time when even journalists and media personalities had started rejecting all PR Stories as they wanted to only focus on news that was based on COVID 19 and the pandemic situation. Once that started getting a little better, there was again a sudden drop in the Public Relations industry as major newspaper publications and news portals either declared to be shutting down completely or to downsize, due to which many of the journalists had to either resign or were asked to leave their job, directly leading to the downfall of the PR industry as well. As the pandemic completely restricted the distribution of physical magazines and newspapers, it was noticed that there was a substantial hike in consumption of content through online mediums like websites, applications, social media portals, and streaming platforms. Through these platforms, the PR industry ensured that the artist and eminent personalities still manage to show their presence virtually and maintain their fame and recognition without risking their lives.

How did the COVID 19 Pandemic ignite the spark towards technological revolution?

While struggling in the initial stage of the pandemic, everyone realized that the temporary solution to the current situation is to adopt technological advancements and this directly led to the rise of people who started using the internet. When using the Internet became a new normal, it made us realize that as until today the society was condemning the internet for all its ill practices, while not looking at what the true potential it holds. After the realization of how the internet has helped companies not only survive but flourish, which inspired a lot of developers that technologically we need to stand at least 10 years ahead of time and thus began their journey towards technological revolution.

Leadership Vs. Management
Beyond Diversity, Equity and Inclusion
Online – The Future of B2C, D2C, B2B
How The Upsurge In Cyber Security Breaches Is Threatening Accounting And Bookkeeping
How Has Strategies in Digital Marketing Changed in Recent Times
Digital Advertising: A New Era in the Advertisement Industry
CONTACT US