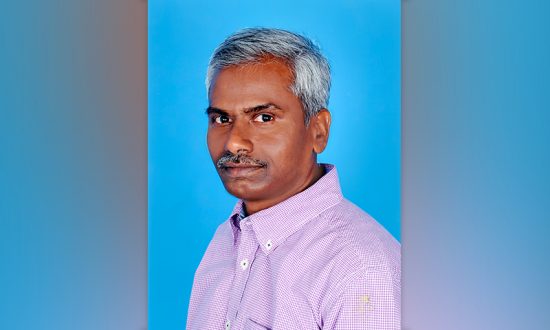 Dr. M. Manivannan is a professor of Biomedical Engineering in IIT Madras, Department of Applied Mechanics. He received post-doctoral training at the Massachusetts Institute of Technology (MIT) in Cambridge. He was a visiting scientist at the Massachusetts General Hospital (MGH) of Harvard Medical School (HMS) in Boston, and a visiting faculty in the Christian Medical College (CMC) Vellore. Before MIT and Harvard, he received another post-doctoral training at the National Institute of Standards and Technology (NIST) Maryland. In 2005 Dr.Manivannan set up the first Touchlab in India at IIT Madras, which is still unique in India. He has recently set up Experiential Technology Innovation Center (XTIC) which is the first multidisciplinary center for innovation in VR/AR/MR and Haptics in India. He has also setup the first Consortium for VR/AR/MR and Haptics in India known as CAVE (Consortium for Augmented and Virtual reality Environment).

In the era of Artificial Intelligence (AI/ML), a new interface between humans and machines is needed. Virtual Reality (VR), Augmented Reality (AR), Mixed Reality (MR), collectively called XR has the potential to play the new interface between humans and machines and drastically change automation – the way we design, manufacture, and maintain, including our healthcare system.  It is merely a beginning, the roads ahead are green, but not without many technological challenges or limitations.

A recent survey shows that the travel-ban due to pandemic has helped accelerate the adoption of XR technologies in automation industries due to the ability to significantly increase efficiencies, reduce costs, and keep more workers safe. Even customers are safer with virtual customer visits. The pandemic has actually ignited innovations in XR.

AR technology enables the merging of both real and virtual worlds, which are displayed via a mobile device, such as a smartphone or tablet, for the aim of supplementing information on real-world items. AR improves the situational awareness by delivering knowledge on demand based on relevant information overlaying on a physical object: and provide live remote assistance, including securing expert input if needed. In the future, when one buys home appliances, AR-manuals would be given in place of paper manuals – showcasing the power of AR in training and education.

VR technology makes the design process shorter, more tangible, far easier – allowing physical manipulation of the object, opening more possibilities, including remote collaboration. It allows finding flaws in a product by viewing it from different angles and assembling it virtually.

VR allows assessment of how individual elements of a system appear, say a vehicle or a factory, without building the system. VR allows for redundancy by allowing users to experiment with several options before making final decisions. VR enables for the evaluation of a system by analysing, planning, and charting modifications that are required in the physical world.

VR allows the practice of important tools and materials that would otherwise not be easily accessible. It allows making mistakes which otherwise is very costly and unsafe. On the production floor, VR trains machine operators or maintenance professionals on new equipment.

The combination of Industrial Internet of Things (IIoT) and VR known as the digital twin – a virtualized representation of a physical device, system or even a big factory –  provides the data necessary to take modeling and simulation to new levels that are unprecedented. Converging physical and unreal, it improves the understanding of the real system for better decision making. This leads to reduced capital spend and maintenance costs, better risk management, and better customer service.

AR is used in several levels of healthcare automation, starting from visualizing information coming from multiple sensors into a single cohesive interface and showing potential causes of a patients’ state via analysis. It helps to detect, prevent and treat numerous diseases with increased efficiency, for example doctors can check the tumour, veins, organs and lesions without performing invasive procedures.

To err is human, and so with the doctors and health workers. XR helps in safety training and systems – doctors and surgeons in training in their clinical skills on the personalized patients’ data before entering into treatment or surgery. A VR patient can help the resident doctors practice their skills without harming real patients. A VR doctor can help real patients to get treated anytime without traveling and waiting. In a telemedicine setup, fully recreated patients’ bodies in VR can compensate for the lack of doctors by connecting and synchronizing multiple sensors.

One of the main limitations in XR is the lack of realistic touch feedback, specifically for training doctors for whom experiential training is vital. Using XR without haptic feedback is akin to humans without hands, specifically doctors, they can only see and hear things in XR. Inorder to convey patient interactions in XR, such as palpating, grasping, squeezing, pressing, and stroking, one currently requires a bulky, exo-skeletons, world-grounded kinesthetic feedback device (haptics devices). Providing touch feedback to bare hands in XR is still a challenge. Currently mass VR systems provide simple vibration which is too simplistic.

Users may suffer motion sickness in VR, and the unpleasant emotions may prevent future VR encounters; hence, VR sickness is viewed as an important problem that must be resolved urgently. The size and weight of the headsets inhibit using the system for longer periods of time, usually not more than 20 minutes. Therefore the training sessions are usually restricted to within this time limit.

Whether it’s face recognition on high-end phones or healthcare, where it helps physicians analyse complicated medical data to diagnose patients, XR is making its way to India’s most distant corners. Along with exponential technologies such as AI/ML, Drones, and others, XR will be a major disruptor for Indian society since what is now being seen in terms of automation and job losses due to automation is only the beginning. India better use these disruptive technologies for its strength. Agriculture and traditional healthcare systems are India’s strengths. These technologies can improve the delivery and the efficiency of alternative healthcare systems or closely related agriculture, and can empower its rural economy where 70% of its population is. Safety, training, and efficiency are key factors for optimal operations in Indian Medical Systems such as Yoga, Ayurveda and Siddha.

Every Industry in India may soon need an XR Strategy to stay ahead.

Delivery the Facts in Technology Today
Bridging the Gap Between Digital and Physical Security for Enterprise Resilience
Role of AI in Digital Marketing
Reimagining Your Employer Brand for the Digital Age
5 Trends that will Shape the E-Gaming Industry in 2021
Virtual Reality: The Immersive Bridge Connecting Architects & Building Product Manufacturers
CONTACT US