Home /LEADERS IN FOCUS/Innovation in Tech and Leadership

Innovation in Tech and Leadership 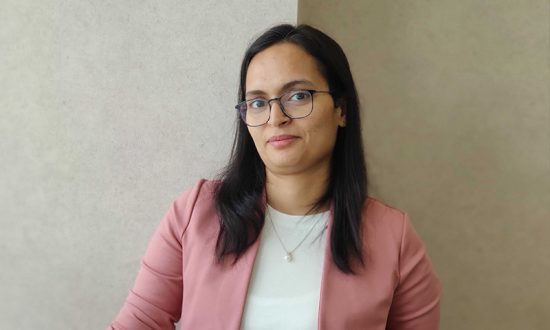 With a goal to create the next generation of highly skilled and motivated professionals, Ms Anjna Bhati, the co-founder of BluePi Technologies, strives towards making a meaningful impact at work. Being a woman and a leader, she understands the importance of being responsible, taking ownership and delivering. “It is all about demonstrating these qualities every day. Turn up, accept the challenge and demonstrate the strength of character. I hope I am able to do that, at least I try to,” says Ms Anjna.

Born and raised in a middle-class family in Delhi, Ms Anjna is a computer science engineer by education. Since her early childhood days, one of her best memories is to do work that one is proud of. With this reflective thought process from a young age, Ms Anjna realised how important it is to acknowledge the work we do and how far we have come. “10 years from now I should be able to look back at my work and be proud of it. That is something that my parents have always instilled in me,” she shares.

In the last few years, Ms Anjna says she has learnt a lot. With the opportunity to develop her team and take it to the next level, she leads the delivery team at BluePi with a goal to create a self-organised, highly capable team, making them the best team in the industry. She believes that the most important things to learn in life are fundamentals, the basics. Once one has a strong base, one can build on top of it. She also feels that everyone should have an attitude that everything is “figureoutable.”

Ms Anjna’s career so far, she says, has been an amazing journey. “It looks like only yesterday I started fresh out of college and the support I have received at BluePi has been absolutely tremendous,” she shares. She adds, “For as long as I remember, I was always inclined towards technology, specifically computer science and software development. So, it is like a dream come true for me, given the kind of work I am involved in.” The most influential person in her professional life is Mr Pronam Chatterjee. He has been an immense inspiration in all aspects of her career and it was under his mentoring and guidance that Ms Anjna is at the place where everyone sees her today.

Being a woman in the tech industry, Ms Anjna felt that she was thriving in an unbiased environment. She strongly believes that to innovate one needs to be motivated, curious, humble and courageous. “From my team and the organisation’s perspective, a leader’s only job is to identify people with these rare qualities, guide them and then let them do their thing. More often than not, innovation is stifled by top-down control, and will not deliver desired results. So, the most important role of a leader is to find the right people, trust them and then get out of their way. People will surprise you,” she adds.

BluePi’s unique mix of domain understanding and the constant pursuit of technological excellence is reflected in the services we offer. While it looks like technology leads the way in the industry, the more important aspect is to be able to clearly articulate the business problem one is trying to solve. Technology is only an enabler. The leadership team in BluePi has trusted, encouraged and supported Ms Anjna to pursue her various idea and thoughts. “Given that BluePi started with great people, with a rich, deep and meaningful experience, it was built on a solid foundation. “Doing meaningful work and transforming lives” is our purpose, our raison d’etre, and the driving force behind building the great team that we have today,” says Ms Anjna.

As the world looks to the future, Ms Anjna shares these words with future women in the industry: “I want to tell the young women out there to get their fundamentals right, build on them, remain confident in who they are and trust their abilities.  Today, there are innumerable opportunities for women in the tech-domain.  Working hard and constantly updating oneself with both technological as well as business skills are very crucial to drive tech innovation and become future-ready.”