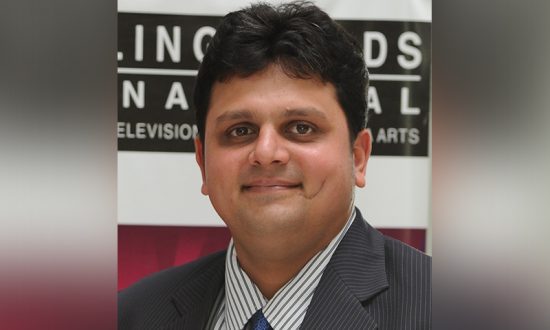 Chaitanya has a multi-faceted 2-decade career spanning the Film & Creative Arts Industry, Education, Event Management & Chartered Accountancy. Most of it has been spent at Whistling Woods International, India’s premier Film & Creative Arts institution. He is currently a part of the leadership team and serves as Vice President & Business Head of the institute as well as its Chief Technology Officer. He also heads the institute’s efforts to evangelise its education by incorporating emerging technologies into its education, through development labs set up in partnership with global technology giants like Sony, Apple, Google, Reliance Jio and many more. He has acquired a strong understanding of the Indian & global Film & Creative Arts industry and how best to deliver education in the same, as demonstrated through several papers written & analytical presentations made by him. He is an active speaker on topics related to Education, Film Education and the Film, Media & Entertainment industries at key global M&E industry, Technology & Education forums.

Without doubt, Virtual Reality has been established today as both a highly-impactful content consumption platform as well as a tool to ease & augment multiple functions undertaken commonly. Education, simulations, deep-sea drilling, treatment of psychological conditions – these are just a few areas which VR has showcased the ability to revolutionise.

The key reason for this is VR’s ability to augment the sense of immersion of the viewer/user. This is even more impactful today because, in an age when average attention spans are reducing, VR provides a captive individual experience tool, devoid of all distractions and enables focus on just one thing. Such a tool in today’s world is invaluable!

That said, there are few myths and misconceptions around Virtual Reality that must be addressed.

VR is a new technology

Just like cell phones and AI, virtual Reality was invented a long time ago too.

The very first reference of VR can be traced back to the Sensorama in 1957 but the first real captive individual viewing VR headset is ‘The Sword of Damocles’ developed in 1966 by Ivan Sutherland. It had all the basic concepts of our current VR headset that included 3D visuals and audio. To add to an extra effect for an immersive experience, there was a custom device that blew scented air.

The ‘90s witnessed many VR headsets such as CyberMaxx & Jaguar VR. Some of these did not specifically fall within the category of a proper VR headset but were just an extension of stereoscopic 3D technology. The early-to-mid-90s also saw the emergence of VR headsets for gaming with both Nintendo & Sega launching their own headsets. Today, we consider all of these as progenitors of our current VR headsets.

Virtual reality headsets can cause headaches and nausea

Well, this is not entirely a myth. Just like any technology, VR too, if abused or not used as per instructions, can cause health issues, especially for the eyes.  Most of the early discomfort, however, is physiological & emerges from the fact that very few people are used to such a heightened sense of realism coming at them from outside. The sense of immersion (yes, ‘Immersion’ is a sense) oftentimes overpowers other senses like balance & kinesthetic sense causing disorientation. The body & brain does take some time to recalibrate itself to a reality where the eyes & ears may see & hear things which may seem very real but are not there.

VR technology is meant for gaming and theme park entertainment only

Quite the contrary. These are actually the newest uses of VR. While Virtual Reality has completely transformed the gaming and LBE (location-based-entertainment) industry adding an experiential aspect to them that was hitherto missing, the impact of VR is actually felt the greatest in areas of education & training – right from middle school all the way through to complex technological & medical modelling. The immersive & interactive abilities of VR enables deeper learning of concepts by enabling greater focus, even for those with limited visualisation skills. Airlines, Militaries, Space agencies have all been using VR devices & VR technology for decades now. Police forces around the world are able to better prepare themselves with drills & simulations in VR. VR is also proven to be an excellent tool for PTSD treatment.

In fact quite the opposite. Given that VR is a frameless environment and content is coming at you from all directions, the best VR experience is had standing up and looking around. In a fixed-point-view 360 video, there isn’t much moving around but in a volumetric video experience, one moves around the VR-space as well. Simulations, theme part VR entertainment experiences are considered physically strenuous. VR Escape Rooms, Virtual Sports and Virtual paintball will make you break a sweat easily. Also, merging of VR content with physical activities (eg cycling on an exercise bike with visuals of the rider cycling in the mountains) actually enables the person to push themselves to exercise longer as the physical discomfort of exercise is suppressed by the immersive VR content.

VR is not Social

Given that it is a captive individual experience, it is natural for people to expect VR to be anti-social. While in principle VR will never be able to replicate the feeling of being in the same physical place with other people, however from VR meetings and co-habiting a VR place while consuming content in an immersive experience with digital avatars of your friends – social VR has been deployed in multiple ways. Yes, it will never be like being in the same physical place as people but it can definitely be ‘social’.

Virtual Reality is one of the most impactful emerging technologies today and is taking massive impactful strides in the fields of education, training, healthcare, gaming, content, live entertainment & other immersive & experiential experiences. The technology of VR, without doubt, has a great future. Just like we have done with the mobile phone & the wristwatch, the world will be visionary with VR as well, expanding the areas which can be used for. Let’s all remember that when the electron was discovered nobody thought it would be put to any use. But today, the whole world is run on electronics. Who knows what the future holds for Virtual Reality?!

How The Upsurge In Cyber Security Breaches Is Threatening Accounting And Bookkeeping
Why is It Imperative for Financial Institutions to Streamline Their Customer Acquisition Process?
How Employers are Responding to Omicron Surge
How to Spot Misinformation in the Data Age
SIP DECT and its Uses in the Hospitality Industry
DBS Bank India’s Custom API Solution Empowers TCIL’s Truck Drivers; Ensures Timely Mobility and Increases Efficiency
CONTACT US